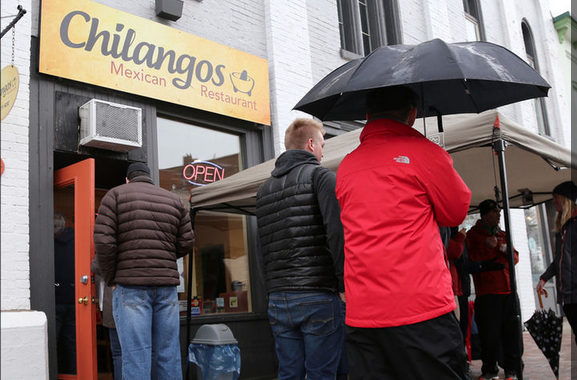 It was hot and hearty soup with a side of heavy rain for the Savour The Chill and Stay Awhile event in the city’s downtown core on Saturday.

The annual soup walk — turned into a full-scale event due to joint efforts between the Belleville Downtown Improvement Area (BDIA) and the chamber of commerce along with the Empire Theatre and Belleville Shrine Club — had all the earmarkings of a signature event.

Then the rains came.

Sheets of the wet stuff drenched the downtown core keeping many would-be visitors at home while those who did brave the streets did so armed with raincoats and umbrellas.

Despite that, organizers were resolute the show would go on.

“It’s not freezing rain, it’s not sleet, it’s not a blinding snow storm,” said Susan Walsh, special events co-ordinator for the Belleville Chamber of Commerce, shortly after 10 a.m. “It’s unfortunate but we’re doing the best we can and everything is running as it should.

“All our arts and crafts are here, under tents, ready to go, we’re just waiting for the kids.

“We just hope everybody will put those little rain slicks on, bring an umbrella and come on down to have some fun.”

The morning’s pancake breakfast was put on by the Belleville Shrine Club.

“For the weather the turnout’s been great,” said Ambassador Leonard Bedford.

“I don’t know anybody who would come out in weather like this but there’s been quite a few.”

It’s not the first time Mother Nature has tried to wash out a Shriner event.

“Last year we had our beerfest in October and it rained then too, but we persevere.”

Plans for a live show by local musician Andy Forgie were scrubbed due to the weather but Forgie, like all the others involved in the event, wasn’t going to let that stop him.

The well-known entertainer stopped for an impromptu acoustic rendition of Singing In The Rain at a downtown street corner before moving his show indoors at one of the warming/drying stations.

By noon many residents took advantage of the flagging rains to get out and try some soup.

“So far so good, it’s my first stop,” said Greg Heffren as he gave a thumbs up to the mac and ham soup provided by the Belleville Freedom Support Centre. “Luckily there’s a break in the rain.”

“It was a good introduction to downtown. I’m glad to see it up again.”

For Abraham Ramos, co-owner of Chilangos Mexican restaurant, the day marked the one-year anniversary of their first day in business.

Even with the inclement weather Ramos said they were still plenty busy.

“Even before noon we had people start showing up.”

Nice Ice Baby — who put out a roasted red pepper and tomato soup with nut-free pesto and mini-grilled cheese sandwiches — took home both the judge’s and people’s choice awards in this year’s contest.

PrevPreviousDowntown’s taste will help bring in the new year