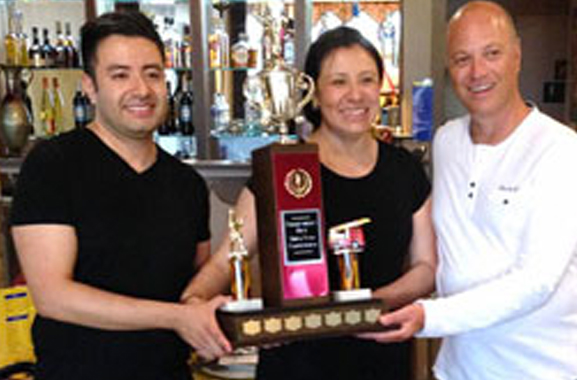 A spicy chicken enchilada edged a traditional lamb cooked in hot sauce in the city’s first ever Belleville Spicy Foods Contest on Tuesday.

Chilango’s Enchiladas Verdes narrowly topped the Lamb Vindaloo by host Royal Haveli Flavours of India according to the four judges given the task of choosing among six dishes to declare the winner and runner-up in the inaugural event.

Anu Dutta of Royal Haveli explained the Lamb Vindaloo, boneless lamb pieces marinated and cooked in hot sauce, is a traditional favourite among those who like their food with bite.

In announcing the winners, Brooker noted the judges had a very difficult time picking just one of the six dishes.

“If the Enchiladas scored a perfect 100, the Lamb Vindaloo was 99.999,” Brooker said. “It was practically flipping a coin.”

The friendly competition among local food establishments was brought about by Boston Pizza’s Panciuk as a way to raise awareness of some of the new dining establishments in the city.

Panciuk said he hopes to continue the contest moving forward and possibly expanding it to feature different types of restaurants and foods in the future.