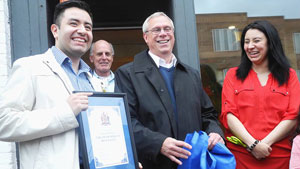 A new restaurant is bringing a taste of Mexico to downtown Belleville. Marlem Power and Abraham Ramos celebrated the official opening of Chilangos Mexican Restaurant with a ribbon cutting ceremony Wednesday evening.

Power and Ramos immigrated to Canada from Mexico, having had a booth with traditional Mexican cuisine at the Belleville Waterfront and Ethnic Festival in 2011.

Ramos said the lack of Mexican food in Belleville and the focus on revitalizing the downtown were deciding factors for opening the restaurant in the city.

“We decided to come with the idea of authentic Mexican food and try to fit in the new downtown that is building now with the new construction,” he said.  “It’s a great opportunity.”

Chilangos has big plans heading in to the summer, including getting a liquor licence and opening the patio in the next two months.

Power said the focus is always on the customers, adding that the community has been very receptive to the new business.

“People have been coming and it’s great,” she said.  “Just being able to provide great service to the community and everybody here in Belleville.”