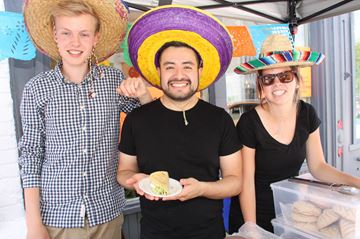 Dozens of people who cared not that Downtown Belleville is in the midst of a massive tear up ventured to Front Street on Saturday, June 18 for the BDIA’s Savour the Summer festival.

The event, previously known as Summerlicious, is similar to the wintertime Savour the Chill event.

Downtown restaurants participate by selling visitors small $2 food samples that are fitting for the season.

Customers are encouraged to cruise through the whole downtown village to try the food samples and vote on their favourite.

Savour the Chill is counted on to bring hundreds of people downtown for one day each February to try chilli samples.

But would people come downtown on a stifling hot Saturday when construction was making the middle section of Front unaccessible by vehicle and pedestrians would have to walk on narrow sidewalks flanked by blue, metal fences?

The answer was yes.

There were clusters of people at several locations by mid-afternoon, including new Mexican restaurant Chilangos, the DBIA office and Earl & Angelo’s, a place that was getting rave reviews from many customers for its burgers.

Although Front Street is closed to vehicle traffic from Bridge Street to Victoria Avenue, as the city moves forward with the City Centre Revitalization Project, the DBIA is doing what it always does – holding events to encourage people to shop downtown.

McKibbon acknowledged that many downtown business owners were nervous when construction started in May. But they are now starting to realize there are many loyal Belleville citizens who make a conscious choice to support downtown businesses.

Those people seem to be making an even stronger effort this year, given the construction situation.

Construction is expected to be over by mid-September and when it’s done, the area will have new sidewalks and lighting, as well as new underground infrastructure, just like the top part of Front Street which endured Phase 1 construction last summer.

“I think there’s a sense of calm and people are seeing the finish line ahead,” McKibbon said. “Everyone’s excited to see the finished product.”

She said more events are planned for later in the summer, including the return of Movies in the Square, which is set to return on Thursday, June 30. Also every Thursday this summer, a representative from a downtown fitness business is expected to hold a free fclass at Market Square at 5:30 p.m.

A few people who spoke to the Belleville News said they weren’t going to let construction stop them from enjoying the festival.

The Stevens family, featuring Natalie and Jay and their sons Liam and Adrian, were among those in a cluster of people at Chilangos, where some excellent quesadillas were being served.

“Every time they do this we’re here,” said Jay. “To be honest, it gets people downtown.”

He said his family was at the last of several stops and they enjoyed samples at Chilangos and Earl & Angelo’s in particular.

Steve Payne also came downtown, with his six-year-old daughter Brooklyn. As Brooklyn checked out a clarinet by Jessica Yarrow, a performer who was playing outside the BDIA office, he said the construction wasn’t inconvenient at all.

If anything, it was allowing her daughter to see a pivotal time in the history of the downtown.

“For kids, it’s neat,” he said, standing a stone’s throw away from heavy machinery and a metres-deep hole in the ground. “They can see what’s going on.”